Beloka Water partners with many of Australia’s best-respected bars, eateries and restaurants. Among them is Momo Bar. Found at world-famous Manly Beach, this much-loved neighbourhood eatery serves up an unexpected menu: Nepalese dumplings and Hawaiian poke bowls. It’s a truly international offering.

We’d heard fantastic things about Momo Bar’s food. Time Out placed the dumplings at the very top of its “Sydney’s Best 20 Winter Warmer Meals” list, while Sitchu included Momo on its “Sydney’s Best Dumplings” list. In addition, the eatery has inspired positive reviews from many of the city’s most trusted publications, including Broadsheet and Urban List. Ask any local you’re going to Momo Bar and they’ll tell you to expect queues.

So, we decided we’d try it out for ourselves. And here’s what happened.

Since we’d heard about the queues, we were sure to arrive early: around 11:30am. The place was already bustling with, well, everyone: young people, families, locals and visitors. But, we still managed to nab a seat and, by midday, were thankful: Momo Bar was absolutely packed. People were beginning to form lines in the laneway.

By the way, you’ll find Momo at 28 Market Place, hidden away, off the Manly Corso, which is Manly’s main street. The bar is certainly not alone. A bunch of cafes and restaurants give the lane a busy, cosmopolitan atmosphere – a bit like inner-city Melbourne.

With the delectable-sounding menu in front of us, making decisions wasn’t easy. There are five types of dumplings to choose from. Meat eaters can take their pick of chicken, pork and lamb; while vegetarians must mull over lentil and mixed veggies. After some deliberation, we went for pork dumplings, which are made “Manly-style”, served in a vegetable broth. Dollops of paprika butter and garlic yoghurt add both flavour and irresistible creaminess.

Our next step was to decide on our poke bowl. In case you’re unfamiliar with the term, the mighty poke bowl comes from Hawaii. It was created in the 1800s, by local fisher people, who would add seaweed and onions to freshly-caught tuna, then serve it on rice, seasoned with sesame oil and soy sauce.

These days, poke bowls are selling like hotcakes all over Australia. At Momo, you can choose from three – Volcano, Tiki and Aloha – or build your own, which can be fun and allow you to cater to dietary requirements. We went for the Aloha, made of chicken, on a base of cabbage and brown rice, and loaded with seaweed salad, pickled ginger and edamame beans. Before we knew it, an absolute mountain of delicious food was at our table. There was little doubt we’d be eating again before evening and maybe later. 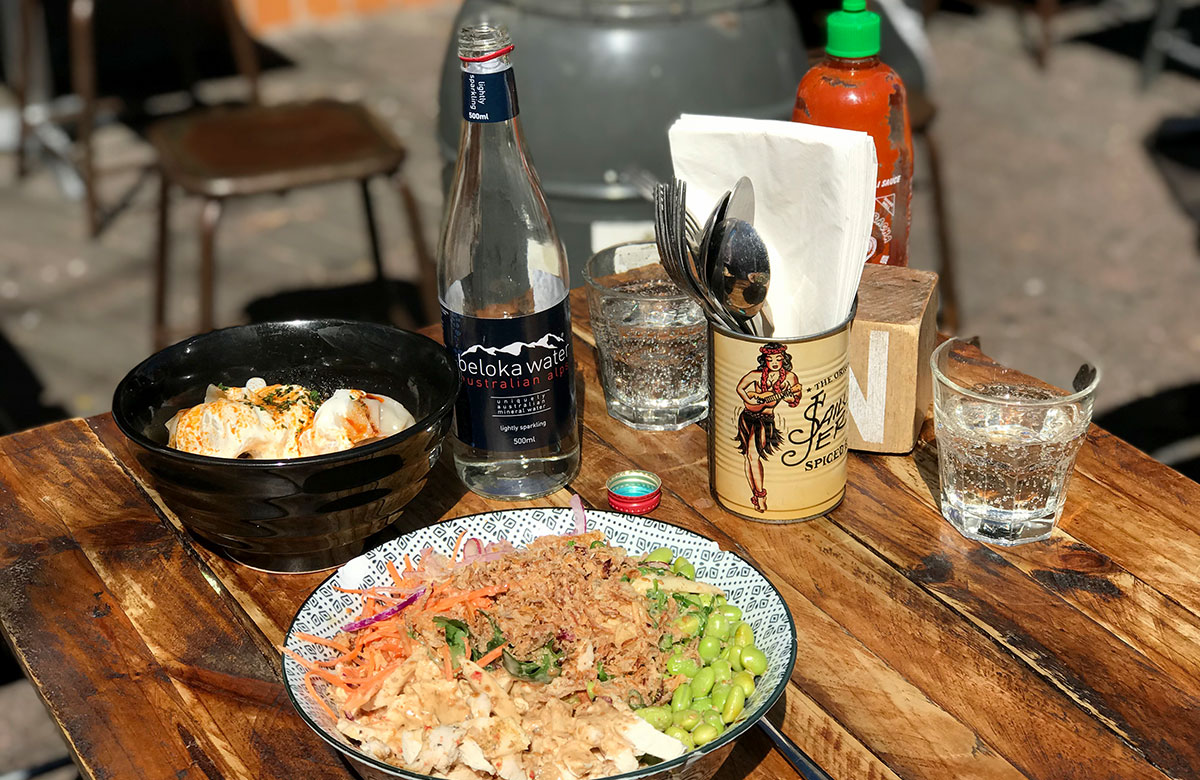 Perhaps unsurprisingly, it didn’t take us quite so long to choose a drink to go with our feast. We ordered 500ml of lightly sparkling, extremely refreshing Beloka Water. The fresh, crisp taste was a perfect match for such mouth-watering, healthy dishes.

Throughout our visit, the staff were friendly and efficient. After ordering our dishes, it wasn’t long before we were tucking in. The waiters and waitresses were happy to answer our questions and respond to our requests, remaining calm and patient, despite the growing queues outside.

Last but not least, how much did this fine lunch cost us? Well, all up, our bill totalled $38.40. We thought it was incredibly reasonable for such a generous meal, especially in such a sought-after location: just a hop, skip and a jump away from Manly Beach.

If you’re ever in Manly, we certainly recommend heading along to Momo Bar and giving it a try. Take a tip from us and arrive earlier than you intend to eat. As word continues to spread, we have a feeling, Momo’s only going to get busier and busier!

And, in case you’re wondering where the name comes from, a momo is a Nepalese dumpling. Back in Nepal, dumplings are served with traditional fillings, such as buffalo. However, in Manly, owner and chef Archana Dellala developed her own fillings, designed for Sydneysiders. They’re complete originals, which you won’t find anywhere else in the world.