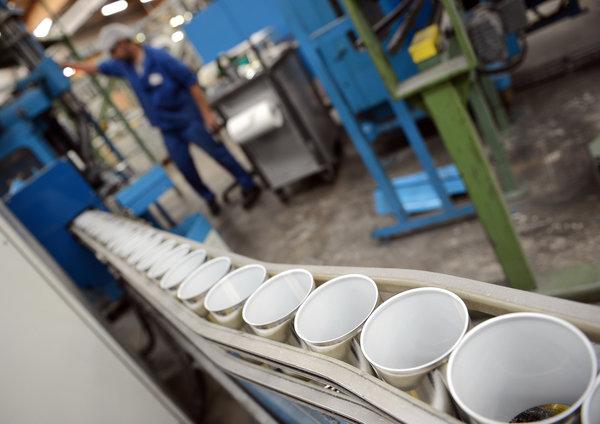 A few years ago, Jodi Flaws, a bioscientist at the University of Illinois, began testing a theory about the risks to women posed by the widely used industrial compound bisphenol A, or BPA.

A series of studies had suggested that it could damage developing ovaries. But nobody knew how. So for a month, Dr. Flaws dosed young female mice with a BPA solution at a level comparable to estimated human exposure in the United States. She then examined their ovaries, focusing on the follicles, which contain the eggs.

The effect of the BPA was immediately obvious.

Compared with normal mice, the follicles of the treated mice were fewer and smaller. Further analysis showed that estradiol, the sex hormone essential for normal reproductive development, was not being produced at normal levels. BPA, it seemed, interferes with enzymes essential in the production of such hormones. Another study published by her laboratory this spring found that treated micestopped producing viable eggs at an abnormally young age.

Scientists have discovered similar effects across an increasingly broad range of mammals, from sheep to monkeys to, alas, humans. The accumulating research fuels rising concern among scientists that childhood exposure to BPA may well contribute to female infertility, and that adult exposure may result in a shorter reproductive life span.

“I think most scientists working today agree that BPA is an ovarian toxicant,” Dr. Flaws said. A review of research into BPA, published this summer in the journal Environmental Health Perspectives, noted that ovarian toxicity is among the most consistent and strongest effects found “in both animal models and in women.”

Discovered in the late 19th century, BPA came into wide commercial use in the mid-20th century. It is an ingredient in products like polycarbonate plastics,thermal coatings on cash register receipts and protective linings in cans and pipes.

Concerns about its health risks didn’t really arise until the late 1990s, when researchers first reported that it appeared to disrupt normal hormone function. Consumer worry led the Food and Drug Administration to ban it in baby products, such as bottles, and manufacturers voluntarily scaled back its use in other goods. But because good substitutes are hard to find, BPA is still used in many materials, and studies have found that a majority of Americans still test positive for exposure.

What that means for our health has turned out to be a complicated subject; manufacturers have pointed out that more than decade of research has produced often inconsistent results. Still many experts worry that the evidence that this chemical damages young ovaries is consistent — and growing.

“There are so many studies of BPA that it’s often difficult to weed out the real effects,” said Tracey Woodruff, the director of the program on reproductive health and the environment at the University of California, San Francisco. “But on this question of ovarian toxicity, all the studies are starting to line up.”

Genetics, lifestyle, and other chemical exposures also play a role in infertility, and scientists are still struggling to figure out where BPA ranks among the risks. “We’re incredibly difficult creatures to study, especially because we’re looking at effects that may take a generation to show up,” said Patricia Hunt, a genetics professor at Washington State University.

She and her colleagues decided to study the compound’s effects in another primate species, the rhesus monkey. They exposed monkeys in the second and third trimesters of pregnancy to levels of BPA comparable to those that humans received. The investigators were looking for the effects on developing ovaries, similar to the changes in rodents. And they found them. The exposure in both trimesters altered follicles and oocytes (the germ cells that develop into eggs). Similar effects might easily occur in developing human females as well, Dr. Hunt concluded.

Researchers at Harvard University have been trying to assess how BPA affects humans through studies of women enrolled at in-vitro fertilization (IVF) clinics. In a recent study, 80 percent of the women tested positive for BPA in urine. Higher BPA levels were linked to a reduced number of follicles — and therefore fewer fertile eggs.

Noting that BPA also turned up in follicular fluid, the investigators also looked at 357 discarded oocytes from more than 120 women visiting the clinics. Higher levels of BPA were linked to stunted human oocytes, as well as indications of chromosomal damage – a finding also found in animals studied by Dr. Hunt. “Together with prior animal studies, the data support the negative influences of BPA on oocyte maturation,” the Harvard team concluded.

Despite the growing body of research, a more complete assessment of BPA’s effects on human reproduction remains a tricky prospect.

“As a species, we tend to have a lot more chromosomal abnormalities anyway than animals like mice,” Dr. Hunt said. “And then people are waiting longer to have children, and that’s also a complicating factor.”

Dr. Woodruff said that a detailed systematic review of BPA was in the works, part of a National Toxicology Program reassessment of chemical risks. It should provide a better sense of how to navigate through recent findings. Her best advice for now? Avoid the compound when possible and, other than that, “don’t drive yourself crazy.”

“We’re still figuring this out, and the burden is on us — researchers, health care providers, manufactures — to do that well,” she said.